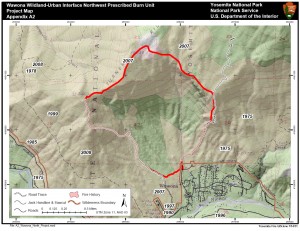 Yosemite fire managers are planning the first prescribed fire for the 2012
season. Defensible space is the primary objective. This project aims to add a significant component of wildland urban interface protection to the community of Wawona.
Click Here for a Map of the Wawona Prescribe Burn in PDF
Click Here for the below Wawona Prescribed Burn Project Forest Service Press Release in PDF

From the US Forest Service
May, 2012
Fire Managers are preparing the Wawona Northwest fire unit as the first prescribed fire for the 2012 season for mid-May.  This project has been planned since the 2007, Jack fire, a lightning caused fire.   Although precipitation is predicted this week, fuel moisture samples indicate the 846 acre fire unit will be in prescription within the next two to three weeks. Firefighters have begun clearing the existing fire lines from winter debris, and they will continue to take fuel moisture samples in preparation of the fire project.  Surface fuels, pine needles, are drying-out, but remain damp under the top layer.  An exact date will be provided as preparations are completed and fuels are receptive to ignition.
The primary objective for prescribed fire is for the direct fire protection to the community of Wawona.  This project will take advantage of the Jack Fire perimeter and reduce hazardous fuel loading in the Wawona Wildland Urban Interface area.  Burning this segment will form a barrier to the community of Wawona from the spread of unwanted wildfire approaching from Turner Ridge to the north and partially from the South Fork Merced River drainage to the northwest.   This project ties together multiple and previous historical research natural and prescribed fires, and mechanical thinning around the community.
Another objective for this project is to conduct ecosystem restoration by applying fire to this fire adapted landscape. Prior to the exclusion of fire over 100 years ago, fire was a natural process that played an integral role in shaping the landscape of Yosemite.  Densities of shade tolerant tree species, such as white fir and incense cedar, and forest litter and duff have accumulated to unnatural and unaccepted levels in the absence of fire.  Through the application of fire, a more natural and resilient vegetation composition can be achieved that would likely support a surface fire, but less likely to support crown fire.
Community members and visitors will see equipment and crews moving into the area as they prepare the fire perimeter for fire ignition and operations.  Adequate fire resources are available from the US Forest Service and other agencies.  Other pre-fire planning efforts include taking fuel moistures and moving remote automated weather equipment into the fire area.
Smoke will be present during the prescribed fire, particularly during the early morning hours.  Fire managers are working with the Mariposa County Air Pollution Control District (APCD) to time the project for a favorable weather pattern that will facilitate good air quality, and disperse smoke into the atmosphere away from smoke sensitive areas.  A burn permit will be issued to the park by the County APCD. Air quality measuring devices are being moved into adjacent nearby smoke sensitive areas.  It is suggested that community members who are sensitive to smoke, plan to leave the area during active ignition.  It is projected to take three to five days to complete the project.
This fire segment is identified in the 2004 Yosemite Fire Management Plan/Environmental Impact Statement and in the Multi-year Strategic Fuels Management Plan.  The goals and objectives for this project conform to the park’s General Management Plan and Vegetation Management Plan.
More information will be provided as the project is finalized.
For additional Information: