We are still experiencing smoke from the Rough Fire and Yosemite. 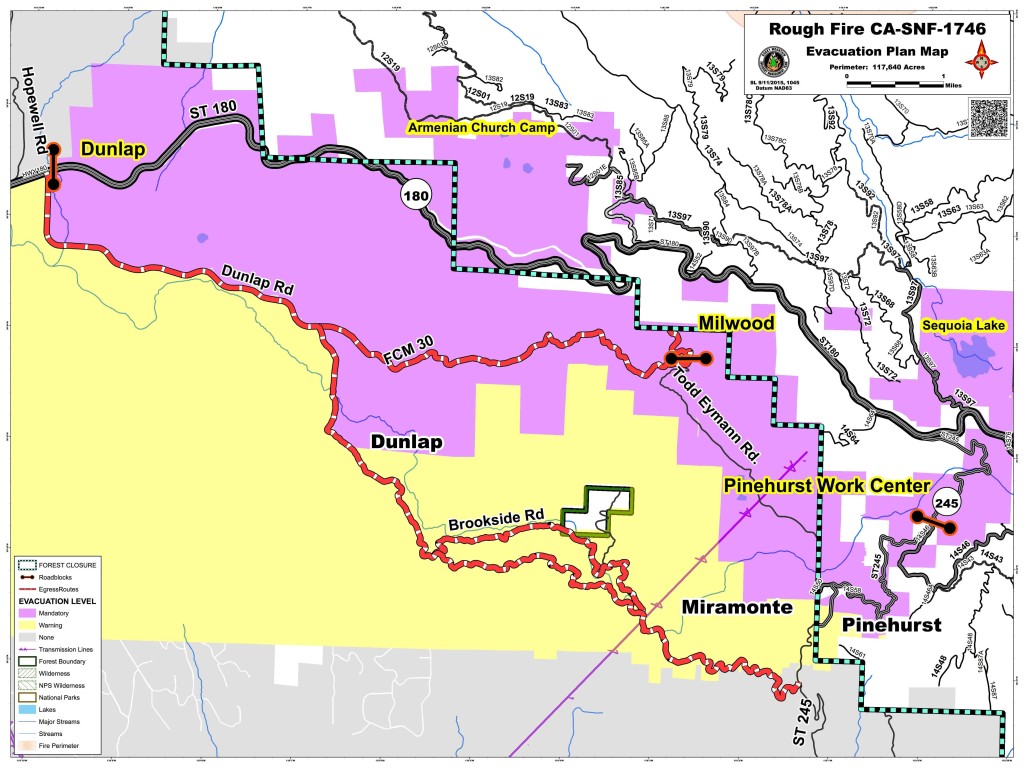 [ Enlarge ] [ Full Size ]
EVACUATIONS
The evacuation map reflects the most current mandatory evacuations and warnings for the Rough Fire. New evacuations and warnings were issued at 6 AM on September 11, 2015.
Community Meeting: Here is the link to the USTREAM for the public meeting held on September 9, 2015.
http://www.ustream.tv/channel/tn5rvyzr9cw.
We are working on answering the questions that were asked via the chat during the live streaming of the meeting Wednesday night and will get them posted as soon as we have all of the answers.
Mapping adjustments resulted in an increase in the total acreage to 128,796 acres and is currently the largest active fire in California.
There are 2,570 personnel currently assigned to the Rough Fire. Containment remains 29%. Rough Fire Information: (559) 332-2028, (559) 549-4837 or (559) 842-6248. The information line is located at the Incident Command Post in Squaw Valley on Highway 180.

Air Quality Today: Heavy concentrations of smoke are expected near the fire and to the west foothills today. Smoke will be slow to lift and transport will be primarily terrain and diurnally driven. Limited ventilation is forecast for today with continued increased impacts expected in the San Joaquin Valley west and northwest of fire. Unhealthy to Hazardous conditions are expected in the foothill communities west and northwest of the fire. Conditions improve in the Owens Valley.
Air Quality Tomorrow
A more south to southwest wind will begin to alleviate smoke impacts in the San Joaquin Valley. More smoke will impact the northern portion of the Owens valley.
Current update
Current information map
Current briefing map
Current progression map
Current air quality report
Evacuation Map 9/11/15
Evacuation Issued by Kings Canyon National Park 9/10/15
Evacuation Warning Issued by Fresno County Sheriff’s Office 9/11/15
Sequoia National Park remains open and visitors can still use the Ash Mountain Entrance Station. Vehicles longer than 22 feet (including trailers) are not advised between Potwisha and Giant Forest Museum.
Forest officials have been forced to close the Hume Lake Ranger District. This includes Forest Service managed land from the southeast side of Pine Flat Reservoir to the boundaries of Kings Canyon National Park, and the Eshom area north of Badger. A closure map can be found on the Sequoia National Forest websitewww.fs.usda.gov/sequoia/ This closure is expected to continue until the Rough Fire has been brought under control.