The story of Firewise and how this all came about is pretty interesting. We are creating a backdated timeline of the events leading up to Firewise Communities today. 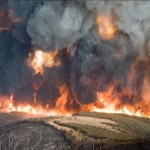 According to the Firewise Communities web site, wildfire burning homes was primarily considered a California only problem, until the 1985-1986 fire season.
The 1985-1986 was a major fire season and was the wake-up call that there was a real problem. In 1985, 1400 homes burned, 600 in Florida alone.
Previous conventional wisdom was that wildfire burning homes was a California only problem. The 1985 fire season alerted national fire groups, including the National Fire Protection Agency (NFPA), that wildfire in the wildland urban interface was a national threat. This was the “wake-up call” that action was needed. The problem was only going to get worse. And it has.
As a result of that horrible fire season in 1985, in 1986 a national program was created to address the wildland/urban interface by the NFPA working with federal agencies. This ultimately lead to the Firewise Communities program of today.
Click to Learn More at Firewise.org